Mrs. Laura Bush was captivating when she spoke to the 650 people who gathered for our Phoenix Academy Scholarship Luncheon on Tuesday, October 22, 2013, at CenturyLink.  The luncheon helped us raise scholarship funds for qualifying students who would not otherwise have the opportunity to experience the life-changing program that Phoenix Academy offers.  In attendance were many current and former Phoenix Academy students, families, teachers, and board members.  The luncheon was sponsored by Charles M. “Mike” Harper, the Lozier Foundation, Ponca Hills Farm, American National Bank, Pete Ricketts and Susanna Shore along with many other local businesses and individuals (Luncheon Sponsors).  Nebraska’s First Lady Sally Ganem, Omaha Mayor Jean Stothert, Bellevue Mayor Rita Sanders and other former and current local officials were in the audience.

The program began with Elizabeth Liebermann singing a beautiful acapella rendition of the national anthem.  Elizabeth attended Phoenix Academy in 4th and 5th grade.  When Elizabeth was in 1st grade, an education professional told her parents, Bill and Nancy Liebermann, that Elizabeth had a learning disability and they should not expect her to go to college.  Today Elizabeth is a successful college senior at UNK (Univ. of NE Kearney) on a music scholarship.  Nancy Liebermann, Executive Director, shared Elizabeth’s story along with the stories of three other alumni and how Phoenix Academy changed their lives.  Nancy’s speech was followed by a short video of current Phoenix Academy students and staff detailing more of what Phoenix Academy is all about.  (Phoenix Academy Scholarship Luncheon Video ) 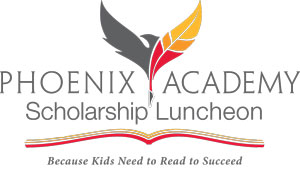 Katie Bender and Justin Jackson Williams, both former Phoenix Academy students, had the pleasure of introducing Mrs. Laura Bush.  The Former First Lady began her speech with an update on Former President George H.W. Bush and Barbara.  She said they are doing great, very active and they are teaching her and George W. Bush how to age gracefully.  She said George W. is working on his golf game; also, he no longer can use a middle-east crisis as an excuse to not pick up his socks!  Their favorite role most recently is that of grandma and grandpa to granddaughter Mila, born to daughter Jenna and her husband Henry Hager.  Mrs. Bush praised Ann Mactier (co-founder with Patti Clark) for starting the Phoenix Academy and giving young people the chance, if behind in reading or math, to catch up.

Education and giving back to the community have always been important to Mrs. Bush.  She talked about her experience teaching in an inner-city school. She said, “Children today face obstacles that previous generations didn’t know, such as drugs, excessive violence and Internet predators.  Many kids spend much more time with peers or alone than they do with family members and millions have at least one parent in prison.” Then she followed with these words to inspire us.  “Young people need us in their lives.  They need to know they are valued and their success matters. The problems are great, but greater still is our love for our children.”  See the Omaha World-Herald article for more details about her speech. 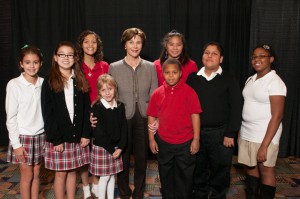 Five Phoenix Academy students had the opportunity to ask Mrs. Bush some questions.  The students met Mrs. Bush prior to the luncheon while they were having their group picture taken.  Mrs. Bush was very gracious.  She asked each student their name, shook their hand and took a few moments to visit with the children.  It was an honor to meet her and very special for the students and staff of Phoenix Academy to have her as our guest speaker.

The luncheon closed with an awards ceremony.  Phoenix Academy considers it a privilege to honor those in our community who have made an impact in the area of literacy.  Sara Woods, Phoenix Academy Board President, honored Del Weber and John Gottschalk for their role in literacy in the Omaha metro area and across the nation.  Del Weber received the 2013 Ann Mactier/Patti Clark Literacy Educator Award.  This award is given to an educator for work that advances proficiency in literacy and education.  John Gottschalk received the 2013 Richard Holland Literacy Advocate Award.  This award is given to an individual for advocacy work that creates and increases awareness, resources, and dedication to advancing literacy and education.  We again congratulate Del Weber and his wife Lou Ann and John Gottschalk and his wife Carmen.  It was our privilege to honor them.