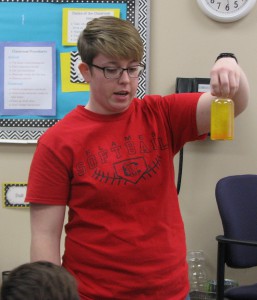 Two students from the College of Saint Mary, Dayna and Shelby, visited Phoenix Academy on Wednesday to share some storm knowledge with our students. One Saint Mary’s student is studying to be a nurse and the other a teacher.  They captured the room as they turned off the lights and turned on the static lightning machine that was placed on the table. As it “clicked” and “snapped” the students “oohed,” and “ahhed.”

Shelby asked the students, “What does this remind you of?” as the other student held a metal wand above the machine, zapping the static electricity between.“A bolt of lightning,” one student answered knowingly. Shelby and Dayna quizzed Phoenix Academy with lightning and thunder questions, finding an answer every time. They learned the timing of thunder and lightning, the color of lightning, and how to count the seconds between to find out a storms distance. “While we see thunderstorms fairly often,” a Saint Mary’s student explained, “another common storm characteristic in Nebraska is tornadoes and today– we’re going to make one.” 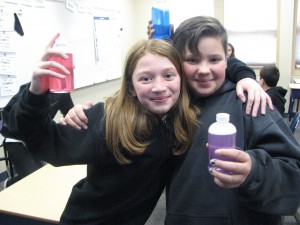 and excitement filled the room as Phoenix students filled their bottles with water, blue soap 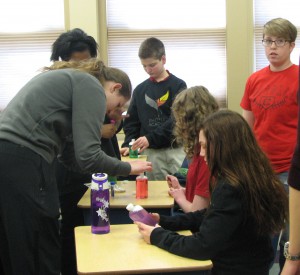 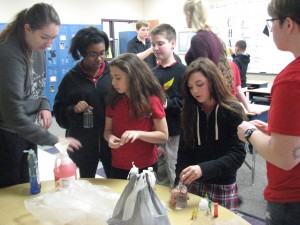 represent cold air, red oil to represent warm air, and food coloring and glitter to represent debris.  “Now,” the teacher-to-be stated, “this is how you spin them.”  As colors whirled into tornadoes, the 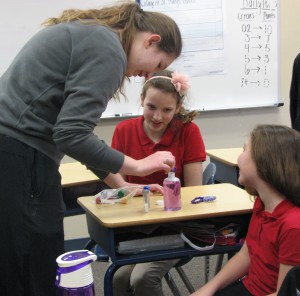 day spun into an end, and our students left Phoenix Academy wound up about their storm awareness.