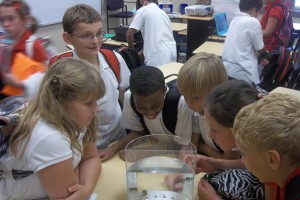 Sometimes the smallest of class pets are the most interesting and the most educational. On August 22nd, Mrs. Hutchson’s unit studies class adopted a tadpole into their classroom here at Phoenix Academy.

The students will be studying the tadpole for the next 90 days as they wait anxiously for the tadpole to gain its legs. In 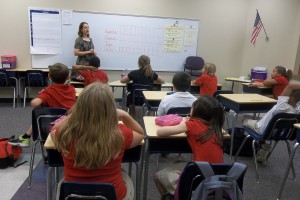 the meantime, they will be logging the tadpole’s growth in their own booklet.

As the excitement died down a little, Mrs. Hutchson took time to review the metamorphosis process with the students. She even captured their eyes with a video of the metamorphosis of a frog as well as images of various types of frogs and what they looked like as tadpoles.

Mrs. Hutchson explained, “Because this tadpole we have in class is a Leopard Frog it will only take about nine weeks to become a frog.Some tadpoles, like the Bull Frog can take up to two years.” “Wow,” one student said, “We wouldn’t even be here!”

“As the tadpole changes, we will need to change its environment,” Mrs Hutchson explained to the students. “Can we add leaves?”one student asked. “If I find a stick can we add that two?” another student inquired. Another student, ahead of the discussion yelled out with great enthusiasm, “Willit eat flies and spiders!?” 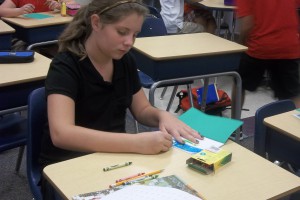 There were so many questions to be asked by the students who were well absorbed in the metamorphosis process of their tadpole. One student giggled, “When do they get their sticky tongues?” With that question the school day ended and the students marched out of the classroom proud of their science discoveries and yearning to see the changes in their tadpole in the future.

Phoenix Academy will be posting updates periodically on Mrs Hutchson’s class and their tadpole throughout the next 90 days. 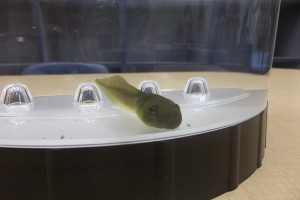 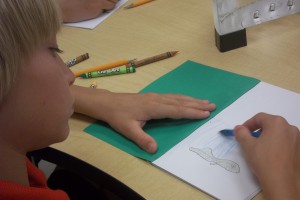