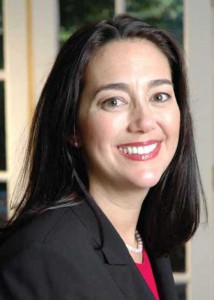 (Omaha, Neb. – Erin Gruwell, founder of the Freedom Writers Foundation and the inspiration for the 2007 movie Freedom Writers starring Hilary Swank, will be the featured speaker at the 2014 Phoenix Academy Scholarship Luncheon on Wednesday, Oct. 1, at the CenturyLink Center Omaha.

“Erin Gruwell is an education activist who created a progressive teaching philosophy and curricula designed to achieve excellence from all students. We believe in the same principles and we think Erin has a wonderful story to share,” Phoenix Academy Executive Director Nancy Liebermann said. “We are thrilled to present Erin Gruwell as the featured speaker for our luncheon.”

Liebermann added that Gruwell’s advocacy of reading proficiency aligns nicely with the mission of Phoenix Academy.

“Phoenix Academy is a non-profit private school for kindergarten through eighth-grade students who need explicit, multisensory, direct instruction in reading and math,” Liebermann explained. “We are committed to helping students achieve the academic skills needed to be successful in the classroom.”

Phoenix Academy educates and inspires students with learning differences to achieve academic success. It is a full-day school that fulfills its mission by using a phonics-based education model and focuses on reading, spelling, writing and math. Most Phoenix Academy students are one or more school years behind in reading and/or math, so addressing each child’s individual learning style and needs is paramount, as is providing a nurturing learning community.

Many Phoenix Academy families enthusiastically testify to the success of the program, Liebermann said.

“My grandson has attended Phoenix Academy for the past six summers. We have been delighted with his progress and enthusiasm for math and reading. I feel he has been well prepared for each year as he enters the next grade,” Julie, grandmother of a student and a former teacher, said. “We will continue to supplement his education by attending Phoenix Academy’s summer program.”

Jodi, mother of a student, said, “Sending my child to Phoenix Academy has been one of the best decisions I’ve made. My child is learning and is happy! She struggled in public school and was unhappy. Phoenix’s unique environment has helped my daughter overcome challenges and progress in her academics.”

“Phoenix Academy inspires and reaches students who are at risk for being left behind, and its work is important to the Omaha community,” Gruwell said. “Freedom Writers Foundation and Phoenix Academy share a common goal of engaging students and helping them fulfill their academic potential. It is an honor to be speaking at the Phoenix Academy Scholarship Luncheon.”

The Holland Literacy Advocate Award is given for advocacy work that creates and increases awareness, resources, and dedication to advancing literacy and education. Weitz was selected for the honor for her efforts to improve educational opportunities for Omaha’s youth through deliberative policy discussions and implementation. Weitz has said that she believes that education is the surest path to social justice and equality, and through her work for The Sherwood Foundation, she facilitated service-learning partnerships between OPS magnet schools and corresponding departments at the University of Nebraska at Omaha. She also coordinated a cultural proficiency program to help teachers create lesson plans that reflect the experiences of Omaha’s large African-American and immigrant populations. Katie was also a key driver in the “greening” of OPS as a strategy to save general operating fund dollars and build a healthier district. She is active with numerous charitable organizations throughout the community including Girls Inc., Building Bright Futures, and the Regional Education Lab for the Midwest.

The Mactier/Clark Literacy Educator Award recognizes work that advances proficiency in literacy and education. Serving as Creighton University’s 24th president since 2011, Lannon is the first Creighton alumnus to head the University. He also served as president of Creighton Preparatory School from 1988 to 1995. Lannon was ordained as a priest in 1986 at St. John’s Church on the Creighton campus. He began his professional career as an admissions counselor at Creighton and honed his educational and administrative skills as an instructor and assistant principal at Marquette University High School, an instructor at Boston College, and an assistant professor at Marquette University. Lannon serves on the boards of Marquette University, Santa Clara University, Boston College, and the Association of Jesuit Colleges and Universities (AJCU), for which he was chair from 2009 to 2011.

Tickets for the Phoenix Academy Scholarship Luncheon are now on sale, and all proceeds will support student scholarships. Individual standard tickets start at $100, and a standard table of 10 starts at $1,000. Patron options are also available. To purchase tickets or for more information about Phoenix Academy, visit phoenixacademyomaha.org or contact Lisa Winton at lwinton@vgagroup.com or (402) 345-5401, ext. 105.