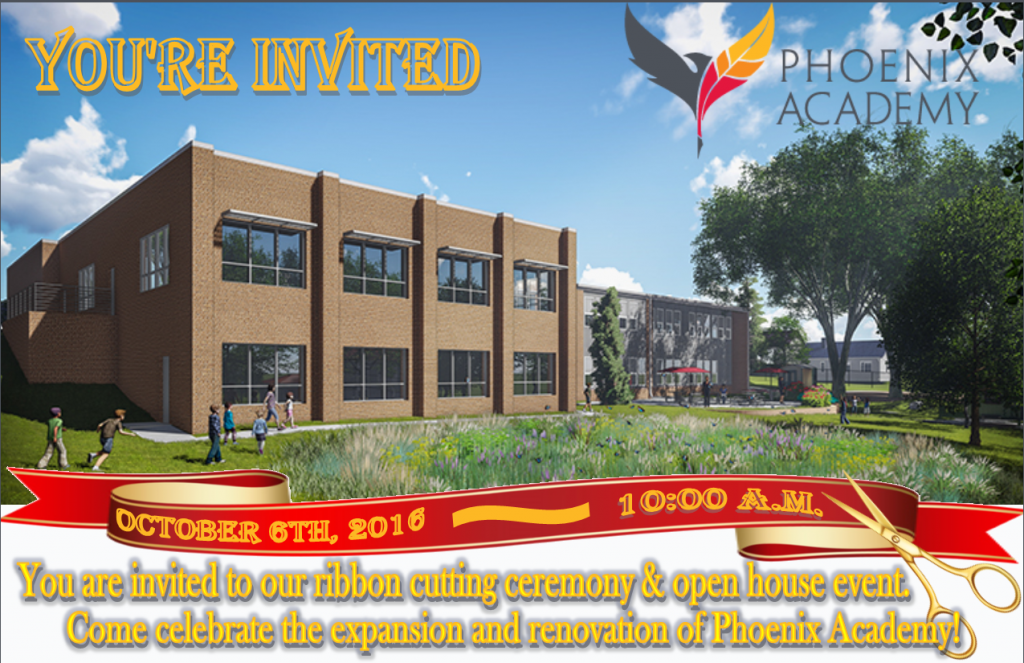 Phoenix Academy will hold a ribbon-cutting ceremony for its 13,800 square foot expansion and renovation project on Thursday, October 6, 2016 at 10 a.m.

The $2.4 million building expansion project added five additional classrooms and a lower-level multi-purpose room for lunches, indoor recess and large group gatherings. In addition, the renovation has provided space for a library, art room, music room, occupational and speech therapy room, and much-needed storage space. The middle school wing is named “Tiffany’s Wing,” in honor of Tiffany Robbins, a young local woman and an animal lover who passed away in 2013 after a courageous battle against cancer. The new wing also features a tribute to the late Charles M. “Mike” Harper, a dedicated supporter of the school.

Among the guests attending the ribbon-cutting ceremony will be Nebraska State Sen. Burke Harr and Dianne Seeman Lozier, Board President. The ribbon-cutting will also include students and their families, teachers, staff, board members and donors.

Phoenix Academy is a non-profit K-8th grade private school that helps students with learning challenges get back on track. It is an intervention school where students transfer from schools across Iowa and Nebraska — both public and private — to benefit from intensive reading and math classes, small class sizes and a supportive learning environment. After students reach their optimal level of improvement, they return to their original educational setting.

Phoenix Academy opened in 1991 in a single bay of a local shopping center, with just one student. As it grew, it took over an additional bay and then a small facility nearby. In 2011, with over 40 students, the school had outgrown its space and moved to the former Omaha Hearing School Facility. Now, with over 100 students for the 2016/2017 school year, the expansion allows the school to help even more students in need, while staying true to its mission of small class sizes to maintain the intensity of the curriculum.