Greg Mortenson (see bio below) began his day in Omaha meeting with approximately 800 middle school and high school students from the metro area including students from Phoenix Academy at KANEKO. He showed the students a video and told them what school is like in Pakistan and Afghanistan. He told them the students there are very excited to have the opportunity to go to school. They attend school with our without a teacher and often have to write with sticks in the dirt because they do not have paper and pencils. He discussed the differences and what our students have in common with them. He told the students there is no reason for a student in the U.S. not to graduate from high school, and he made them vow they would all finish school. He talked to the students about the importance of community service and asked how many of them did volunteer work. He was very impressed with the number of students volunteering. He said we had the second highest percentage of volunteers in all his visits across the nation with Topeka, KS taking first place.

Next he talked to a small group of about 30 students including those from the Phoenix Academy about his program “Pennies for Peace”. Some of the students had raised money for the program and presented Mr. Mortenson with checks and pennies. A penny will purchase a pencil for a student at one of his school and that pencil can be life changing.

After the Pennies for Peace group Greg hosted a Round Table discussion about education in the metro Omaha area and the United States with local professionals in education, government officials and groups that work with youth.

At 6:00 p.m. a fundraising reception was held for the Phoenix Academy where those in attendance had an opportunity to meet Mr. Mortenson in person. Following the reception at 7:30 p.m., six of our Phoenix Academy students read Greg Mortenson’s children’s book “Listen to the Wind”, to a sold out crowd and were met with thunderous applause.

The finale of the evening was the inspiring lecture with Greg describing his work and the work of his non-profit organization, Central Asia Institute, in Afghanistan and Pakistan, To date they have built 145 schools and their mission continues …..promoting peace through education. 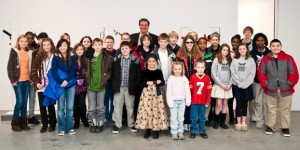