The room was alive with colors of the academy and the beautiful centerpieces and stage decorations were also in the theme of the school colors and fall.  The Phoenix Academy logo was projected onto the dark grey drapes behind the stage with red, yellow and orange lights illuminating the room.  This was the setting for the 2014 Scholarship Luncheon, held on October, 1st at the CenturyLink Center. 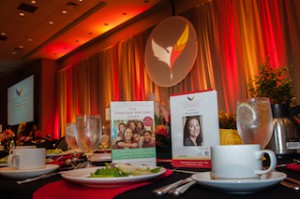 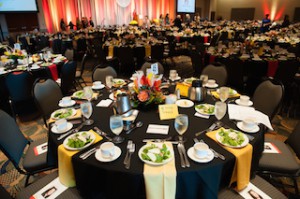 Nancy Liebermann, Executive Director, started the luncheon talking about students who fall behind, how it makes them feel and how it affects not only them but their family and society.  She gave three success stories of Phoenix Academy alumni who were struggling in reading, how the school has changed their lives and their families and how they are now making a difference in their communities.  Nancy continued by introducing five current Phoenix Academy students, explaining what brought them to Phoenix Academy and praising them for their hard work, improvement and unique talents.  One student has the best handwriting in the school,  another student had increased three spelling grades and one student now begs her mom to let her read “one more chapter” before bed! 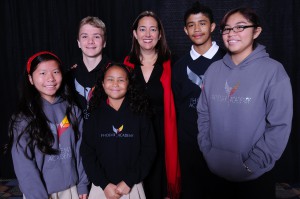 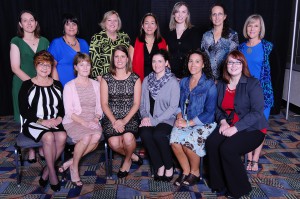 Next in the program, Board President Sara Woods introduced this years Phoenix Academy Literacy award winners.  The winner of the Mactier/Clark award named after the two founders, Ann Mactier and the late Patti Clark, was Father Timothy Lannon of Creighton University.  Father Lannon began his speech saying he is so grateful for Phoenix Academy because when he went to school students were taught under one learning style.  Father Lannon said, “Thanks to Phoenix Academy who teaches to every student, these students lives are being changed with great hope for the future.”  We were delighted to have Ann Mactier in attendance.  The winner of the Holland award was Katie Weitz.  Weitz began her acceptance speech saying “I always say that when I grow up I want to be Dick Holland!”  Katie Weitz urged everyone, “to embrace the title of literacy advocate.” In doing so, she asked the audience to read to their kids, to read so their children could see them reading, and to read a lot of different perspectives. 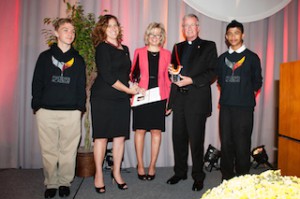 After the awards our featured speaker Erin Gruwell captivated the audience with her passionate life story of her first year as a teacher.  Erin took 150 high school students, most of whom the administration had written off as hopeless and many of whom were destined to drop out if they survived the gang violence, from freshmen to senior year.  Erin shared how caring for the students, giving them a reason to come to school and not giving up on them made a difference in their lives. Included in her speech was a clip from the movie Freedom Writers based on Erin and the students’ lives featuring Hilary Swank. Erin was a moving and sincere speaker who touched everyone in the room and connected perfectly to the mission and values of Phoenix Academy.  She motivated everyone to see hope in their day to day lives and aspire to build hope within students so that they too may find success.  We are all teachers, whether we are molding young minds ourselves or role modeling experiences to affect others lives.  Phoenix Academy students had the pleasure of presenting Ms. Gruwell with a Phoenix Academy sweatshirt and a Phoenix Academy mug for her favorite drink – hot tea. 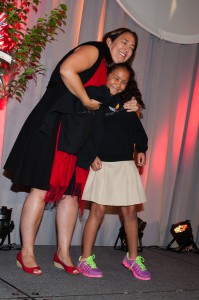 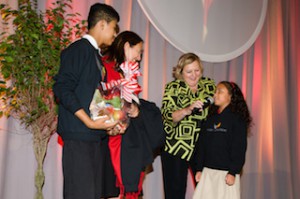 We thank our sponsors for making the luncheon possible.  It was an incredible, enjoyable and successful event that resonated with all who attended.  A special thank you to Lisa Gotsdiner (chairperson) Erin Gruwell, Vic Gutman and Associates, Blooms and Sheila Fitzgerald, Jane Rips, E Creative, R & S Press, Mele Mason, WOWT,  CenturyLink Center, Levy Catering, J & S Audio Video, Jack Mayfield, the Phoenix Academy Luncheon Committee, Phoenix Academy Board of Directors, the Phoenix Academy staff, parents and students.  The luncheon helped raise awareness of the Phoenix Academy and funds for scholarships. With this, Phoenix Academy can be the place that young minds not only take flight–they soar. 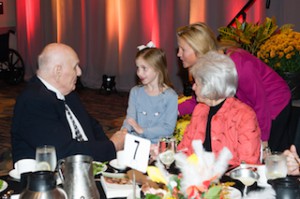 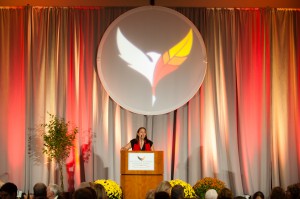